Big shift in the character of wine sales

Our European Committee predicted yesterday an 8% drop in wine consumption (between august 2019 and July 2020) compared to the average of the last five years in the 27 member states of the EU.

The Committee notes that quality wines, in particular, are drunk less because they are usually served in restaurants and bars. As a result of the corona crisis, the hospitality industry has been temporarily closed down in many places.

Consumers did buy more wine in retail outlets such as supermarkets and specialised stores, but in the Committee's opinion, this slight increase is not enough to compensate for the drop in overall sales.

In addition to a drop in wine consumption in the EU, the committee also expects wine exports to take a hefty blow and predicts a 14 percent drop. The drop is explained not only by the decline in demand due to the corona crisis, but also by US import duties of 25 per cent that have been applied to European products such as French wine since last year.

Reports from France further state that since March 17, consumers have side-stepped the alcohol department in-store, despite the closure of hospitality outlets. Focussing on basic necessities, consumers have been buying less wine in supermarkets (-31% in the first week of April), although the surge in drive-through shopping is caused wine sales to experience a meteoric rise (+158% at the beginning of April).

Still wine sales in France fell by 2% from March 13 to 29. Sparkling wines, which have been severely affected by the lack of inclination to celebrate at the moment, plummeted by 29% and Champagne sales dropped a staggering 53%! Conversely, rosé wines held up with a 3% increase in sales, “thanks to the particularly sunny weather during the first weeks of lockdown”, said Nielsen. Large formats like the bag-in-box, which are a good solution for lengthy lockdown and storage issues, are popular in supermarkets. From March 16 to 29, sales of boxed wines soared by 43% across the channel.

All developments add up to major consequences for the wine trade all over the world. We have to conclude cautiously that the closure of the hospitality industry is causing wine consumption to drop, but also to shift in favour of wines that are sold in supermarkets and online. Reports from all over the world show that online purchases of wine rose sharply right after the start of the lockdown. A big wine importer from California told us Friday that wine sales in retail (mostly supermarkets & online) has shot “through the roof”. The WHO is even afraid that alcohol will be used as an 'unhelpful coping strategy' and if you look at the responses to the FB post on the committee’s conclusion, lots of people are cheerfully noting that the drop in consumption is not based on their consumption @Home.

But in writing about ongoing and shifting sales we also see some very unfortunate wineries (in South Africa for example) that are not even allowed to sell or distribute their wines like Tim from Seven Spring Vineyard told us! Their lockdown is 100%. Our thoughts are with you and we'll keep our fingers crossed for better times when the ban on distribution is lifted. 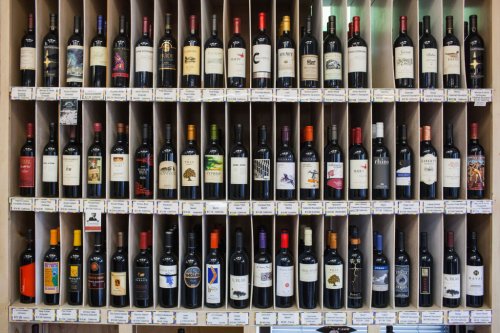 Big shift in the character of wine sales